Hey, it's been a while. I hadn't realized how long of a while it was, however. Sorry about that. I've been dealing with real life stuff, Meanwhile, something went wrong with my email, so I haven't been getting notificiations from this page, and while I have been trying haphazardly to fix it, I finally gave up and created a new one.

My official author email is ljmcdonald.author@gmail.com. I see at the top of this page that it's listing hydraarill@gmail.com instead and won't let me change it, but either will reach me.

It looks like people have been asking me the same question of what's up with the writing and when the next book is coming out. Unfortunately, the answer is, absolutely nothing. The fifth book is written, but there's been zero interest in it from the publisher. I have no feedback on why or if that's going to change. At this point, I've basically stopped asking because I'm not getting an answer. There's also been no interest in anything else I've written.

I've looked a bit into self-publishing and put out a few things on Smashwords, but the response isn't really worth the sheer amount of work it is to prepare a manuscript for publication, especially when you have to do all of the work yourself. I think that the last piece I put up, "Memories of Alexandria" sold maybe two copies. The thought of preparing a full length novel and getting that sort of response is outright depressing and I honestly don't know if I have the legal right to self-publish book five of the Sylph series anyway. Or if anyone would be interested in anything else I've done.

So that's where I am right now. I'm not writing much. I keep tripping over 'this isn't what people are going to want, this isn't good enough' and not writing anything. I'm creating a lot of art, which keeps me busy, but no one really sees that.

Sorry I don't have better news.

In Memory of Alexandria

In Memory of Alexandria

Soon to be appearing on Smashwords...

I have, however, decided to try putting a short story up onto Smashwords, to see how it does. I don't have any major publisher prospects on the horizon, sadly. I guess I don't really fit into any one specific genre, so I make publishers leery.

Anyway, I'm putting up a short story, once I'm happy that the formatting in the ebook is good. It's titled "In Memory of Alexandria" and I've always liked it. I've also done the cover art for it. If it does well, I'll see about tossing up more works that I have, so if you like it, please buy it and tell your friends. I'm putting it up for .99 cents, which hopefully people will think is fair. 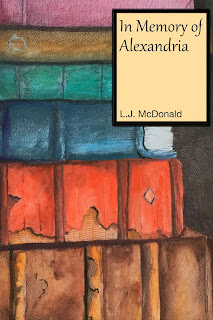 Okay, here's my recipe for the 3 Seas Inaugural Joint Author Promotion event on their Facebook page.


Okay, this recipe is special to me because it's literally almost the only thing I can cook without the use of a microwave. I don't remember where I learned it, but I've known it for a long time now and I break it out occasionally on the odd Sunday for breakfast.

Hey, everyone! If you're looking for a chance to win something before Christmas, 3 Seas (my agents) are running a contest starting next Monday 1 December and running through Friday 5 December. The way it works is, (from my limited drugged-up-on-cold-medication understanding) go to their Facebook site anytime that week and see all the author sites who are participating. Each of them will have a recipe they love posted that will hopefully be less random than mine.

Go to all the different sites, collect delicious recipes, and "earn" raffle entries for the prizes. The more sites you visit, the more raffle entires you get. I'm not sure how that's counted. You think I understand computers? Not really.

Not too bad. So come back and see my recipe offering on the 1st and good luck winning the prize.

(Their Facebook URL in case I messed up embedding the URL:  https://www.facebook.com/pages/3-Seas-Literary-Agency/75205869856?ref=bookmarks)

Has it really been that long since I posted? Wow. Even for me, that's almost impressive, in a sadly pathetic sort of way.

I'm sorry about that. I doubt anyone's sitting around with bated breath for me to say anything, but I didn't really mean to keep quiet this long. It's the introvert in me. I'm not the best around at the social interaction thing and if I don't have anything concrete to say, I don't seem to say much of anything.

I will have something for Dec 1. Not writing news, I'm afraid. My agent's running a 3 Seas Inaugural Joint Author Promotion where we'll all post recipes. Mine should be somewhat frightening, given as I can't actually cook. >.>
Posted by L.J. McDonald at 7:00 PM 2 comments:

The Sylph Hunter is out!

Woohoo! My book is out! I really hope all of you enjoy it! And if you do, spread the word!

Hey, good news.  THE SYLPH HUNTER is being featured by Amazon. If you want a chance to win a free copy, go here.

That took way too long...and btw, here's the prologue for my new book.

Okay, I managed to fix my stupid book listing page. Pain in the butt! I've even put the excerpts for my last two books in the page descriptions, which is apparently something I totally forgot to do sooner. Books 1 and 2 always had them, but now 3 and 4 do as well.

That said, here's the prologue for book 4. Keep in mind, this is a cut/paste of the last doc version I have of the manuscript (frighteningly full of copy editor remarks and cuts that I've cropped out). I don't usually have the clean official final version of the book, so this might be a bit different from the published version (I'm talking maybe a word here or there and some formatting, I hope).

Here's hoping it wets your appetite. Uh, pun not intended, if you see what I mean by the end of it...

Uh, anyone who's visiting my site today, I kinda sorta accidentally deleted the My Writing page. Working on it...

I'll be updating the front page too, once I remember what program I used to create it with...

*sound of head hitting desk*
Posted by L.J. McDonald at 11:50 AM No comments: